What is Coherence Scanning Holography?

Coherence Scanning Holography (CSH) is a patented method developed by Seven Bel which is applied to sound imaging based on audio data captured with moving microphones. It is fundamentally different from beamforming – the traditional method used by conventional acoustic cameras for more than 20 years.

WHAT DETERMINES THE QUALITY OF AN ACOUSTIC CAMERA?

The image quality of an acoustic camera is mostly governed by two parameters, namely the size of the measurement surface and the number/alignment of microphones distributed across that surface.

The following relations have to be considered:

Many applications from different industries require the localization of complex sound source distributions with different levels of loudness and with dominant frequency content below 1kHz.

Typical applications include the localization of acoustic bridges in buildings or sound emissions from engine and powertrain components.

Thus, the use of a large measurement surface with a high microphone density is a must for many applications.

With coherence scanning holography, these critical requirements for the quality of an acoustic camera are fully met:

HOW DOES COHERENCE SCANNING HOLOGRAPHY WORK?

Coherence scanning holography requires a set of microphones to capture the incident sound field along a circular trajectory.

Due to the motion of the microphones relative to a sound source, the audio data acquired over a full revolution contains a Doppler shift of the frequencies involved.

A stationary microphone at the center of the scanning area is used as a reference and is free from Doppler shift.

A magnetic rotary encoder which is co-axially aligned with the rotation axis of the linear array, measures the angular position with respect to the constrained axis of rotation. 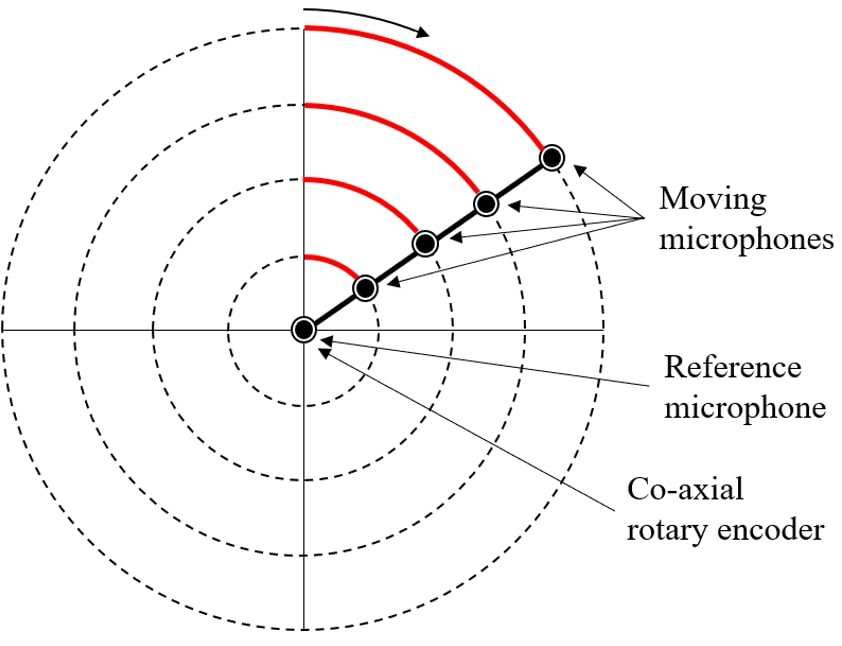 In order to compute acoustic images from the acquired audio data, a so-called reconstruction plane which is parallel to the measurement plane, is chosen at a distance where the distribution of sound sources is expected.

At this point, we shall note that the Doppler shift is fully compensated for a point where a sound source is actually located. For any other points away from the point source, an additional Doppler shift is induced in the backpropagated audio signal. 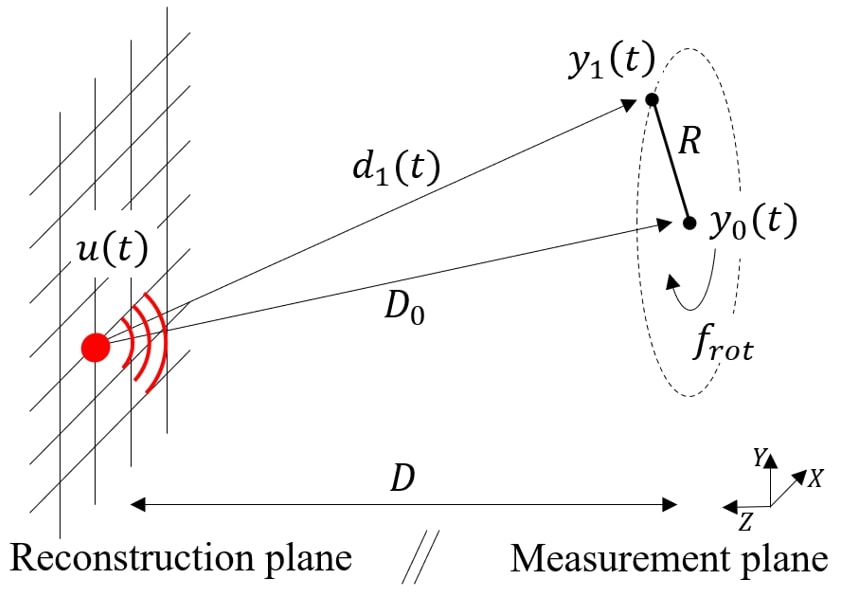 This measure is used to produce a heatmap representing the distribution of sound sources over the entire reconstruction plane.

The heatmap is finally overlaid onto an optical image of the measurement scene to give the user a clear indication of the spatial position of the sound sources.

What is Coherence Scanning Holography?

This website uses cookies. Those have two functions: On the one hand they are providing basic functionality for this website. On the other hand they allow us to improve our content for you by saving and analyzing anonymized user data. You can redraw your consent to using these cookies at any time. Find more information regarding cookies on our Data Protection Declaration and regarding us on the Imprint.